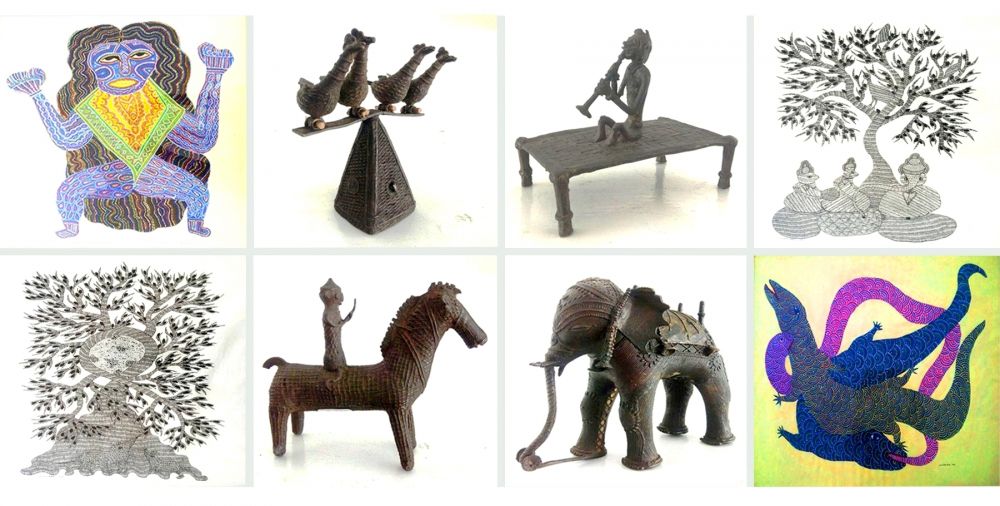 Metal-working in eastern India, particularly in the tribal regions of West Bengal, Chhattisgarh, Bihar, Madhya Pradesh and Odisha, uses an unusual technique for moulding metal forms. The entire detailing of the outer surface of the sculptures is created with hand-drawn or press-ejected wires of beeswax, also known as dhuna. The result is a surface that resembles the texture of embroidery or baskets. The origins of this method may be traced back to the tradition of basket-weaving, munj grass constructions, and mat-weaving, which then spread to the interiors of eastern India.

Hailing from the Gond tribe in Madhya Pradesh, Jangarh Singh Shyam lived in the jungles of Mandla until a chance encounter with the Modern artist Jagdish Swaminathan in the 1980s. Swaminathan, who was leading an Indian collective on a study tour with the aim of creating a collection of tribal art in Bhopal, came across Shyam's house, whose walls were adorned with his art. Upon enquiring, they met Shyam - only a teenager at the time, but with a striking style of painting.

Swaminathan took Shyam on as his protege, bringing him to Roopankar Museum in Bhopal, where he learned to transfer his art from walls to paper. He created a series of works on paper and canvas which are displayed at Bharat Bhavan today.

Shyam's forms were based on the deities and divinities of the Gond tribe, and the animist culture of worship surrounding them. Suspended in space, he rendered them like silhouettes creating the effect of shadow puppets, in swatches of bright colours, featuring dots and hatched lines. The inspiration for using fine dots comes from the Gond tribe. "Jangarh explained to me that when the shamans of his tribe go into a trance, they have the feeling that the particles of their bodies disperse into space to join with those of the spirits and form other bodies. This is an ancestral, poetic vision of the atom, of the infinitely small joining the infinitely large." (Pedriolle, p. 63)

In 2010, the Musee du quai Branly in Paris held an exhibition called Other Masters of India, which carried large works on papers by Shyam from the later 1980s and early 1990s, which according to Pedriolle, "reveal a development in the direction of a profusion of psychedelic colors and more elaborated forms. The second half of the 1990s was marked by an unusual refinement, pictorial maturity, and graphic mastery that resulted in some of his best works." (Perdriolle,p.61)

Shyam passed away in 2001under tragic circumstances in Japan. He was in his early thirties. In a short-lived but exceptional career, he left behind a powerful and dynamic legacy which reached for the new while preserving the roots of the Gond artistic tradition.

Born in 1970, Ram Singh Urveti like most other tribal artists, has had no formal education in art. He imbibed and honed artistic skills under Jangarh Singh Shyam

Ram Singh Urveti, divides his artistic practice between paintings and drawings rendered in ink, both on canvas and paper. Urveti is an inspired and meticulous poet of the tree. The tree trunk is his chosen signature: he modulates it into symbol, icon, parable, and mythic architecture. Urveti transmutes the tree trunk into a snaking trident that emerges from a tree-god’s head; in similar vein, the trident-trunk offers a theatrical backdrop for an assembly of village deities.

Sometimes, Urveti blurs the distinction between the tree trunk and the river: in some of his drawings, he invokes the tree as a flow of village memory and everyday life; this conception is revisited in a resplendent painting dominated by a spreading red tree, encompassing human life in the agricultural zone and animal life in the forest, and two rivers that meet in a basin, bursting with aquatic life, suggesting a man with his arms flung wide. In another hymn to the communion of red tree, blue river and green flames of grass, Urveti produces the sense of the universe as a branching, fruiting, endlessly self-extending energy.