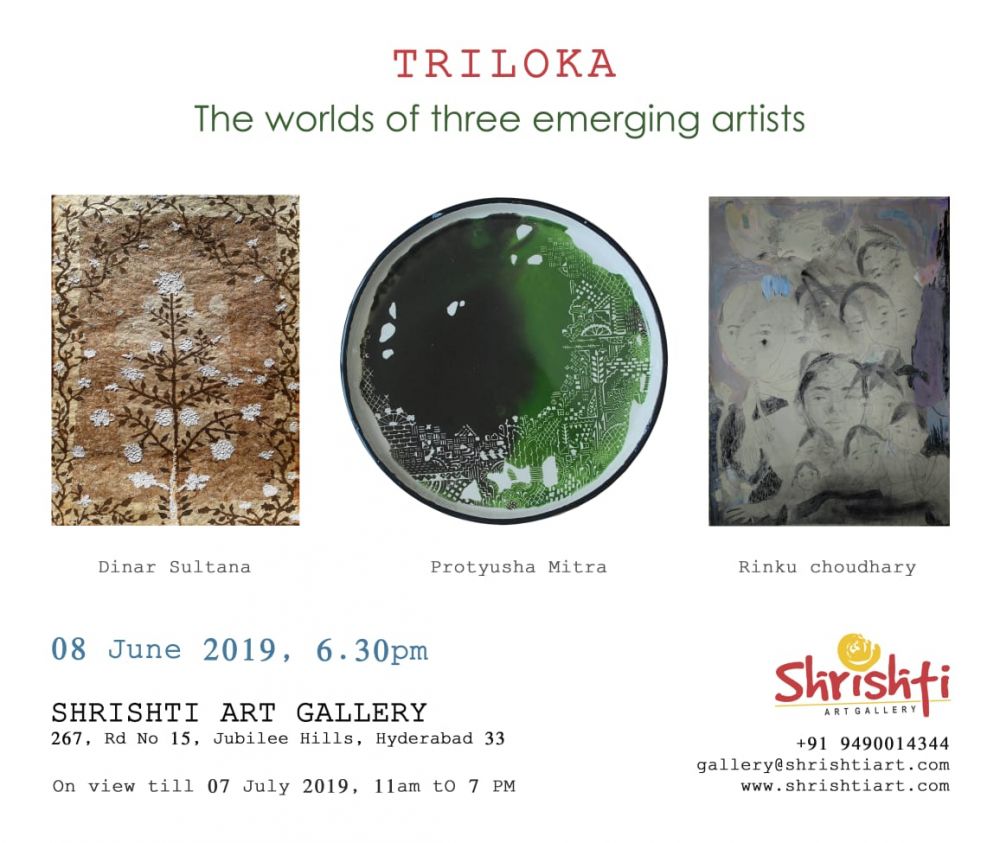 The Inside-Out by Rinku Choudhary

My works emerge as a personal response to my immediate environment and representation of my daily life struggles with family, never-ending negative thoughts, anxiety and depression. Depression to me is a sense of despair and constant sorrow and anxiety is feeling a lot all at once.  It is feeling of constant apprehension.

I chose this topic as to see myself and my emotions objectively. I try to make these internal deep experiences external, through my works.

Anxiety bars the sufferer from the risk of discovery, the desire to explore new ideas and the possibility of exiting a comfort zone. It makes sure that you will never be alone in your own mind. It is quite and steady, reminding you of your past failures and fabricating your future outcomes.

Using my own stories, I am capturing the raw essence of anxiety through different mediums on paper and canvas. Most of my works come out to be dark, and I hope they portray that feeling of isolation.  Through this personal journey, I have grown and found depicting my fears in works, has become therapeutic.

The Erstwhile World by Protyusha Mitra

“Architecture plays a salient role in my works. Previously I have used discarded, decayed wooden pieces, which itself carries a human manipulated history to portray the gray cityscapes and distortions of the natural views. The old yet beautiful architectural traditions face threats of destruction. The visual design changes as the city grows every day. But yet they continue to retain the rhythm of visual pleasure in the grey contemporary geometry.

My new set of work takes reference to natural and architectural design forms creating nostalgia, and shows a continuous process of change. The geometrical motifs play mysterious role in architectural spaces. These plays of design find balance into distortion.

The Rustic World of Dinar Sultana

Being born in a small, rural district in the eastern part of Bangladesh, my childhood can be narrated as episodes outlined by rigorous discipline and control. Inarguably so, the desire was always to be independent—be it from the clutches of my mother’s reproach, or from the expectations at school. Once I began my training in art, it was through my newly evolved vocabulary that I found reprieve.

I do not paint; I quite simply make. The fleeting ephemeral ties of nature have long since fascinated me. I often asked myself, how can I translate this materiality of nature onto my work, when it refuses to be tamed or controlled as per one’s will? To this extent, I have adopted an almost archival, quasi-scientific method of categorizing and documenting various hues, textures, surfaces found in nature, all in pursuit of understanding its materiality. Steaming through a ruthless wave of time, I try to make art a little more sensitive. As I transform everyday materials and those associated with rituals, the emphasis is on hand-worked processes. Oftentimes engaging in a play of absurdity, I have also used cotton-pulp, human-hair, snake-skin and a slew of other discarded ephemerals. I then began creating my own paper from scratch, using pastes of flower-based pulp and extracting colour from elements such as flower, bark, seed, leaf, sometimes stone and clay. However, creating is nothing but a violent process of making. Something that an artist must come to terms with at some point in their journey. For me, it was through loss.

When I came to Santiniketan as a student, the picturesque town both nourished me as, I was caught in the rapture of independence, but also challenged me, when I received the news of my mother’s untimely demise; followed closely by the loss of another loved one. For a while, in nature I saw but a vast see of emptiness. However, from then on, in the mere act of changing seasons I found the profound tale of life, death and regeneration. I reconciled my own loss with what I saw in nature; how its remnants are not lost but quite simply reborn. This is how I began—not painting, but documenting, observing, understanding. Most of this process happens out of my control. The result is at best accidental. I’d like to think that my art tells a tale of both control and accident, echoing a principle of life itself.

Passing through many stages of explorations, my work is now attuned to the present scenario of Bangladesh. After returning here, I could no longer stay blind to the upheavals, the political conditions around me, with people turning into monsters in an environment no longer impinged by the discipline of morality. Farmers are no longer able to sustain themselves; coal politics divide the land at large. In this frenzied tale of greed and avarice, a lacuna in the erstwhile sonorous culture continues to grow. I now link my art to local traditions of craft, the role of labour in making art, signaling the fading tradition of the region. I use motifs from craft—Kantha and terracotta—while the rawness of coal signals both the political and the void. The materiality that I channeled earlier once again reprises itself into this body of work, but is now renewed by a live political undercurrent.”