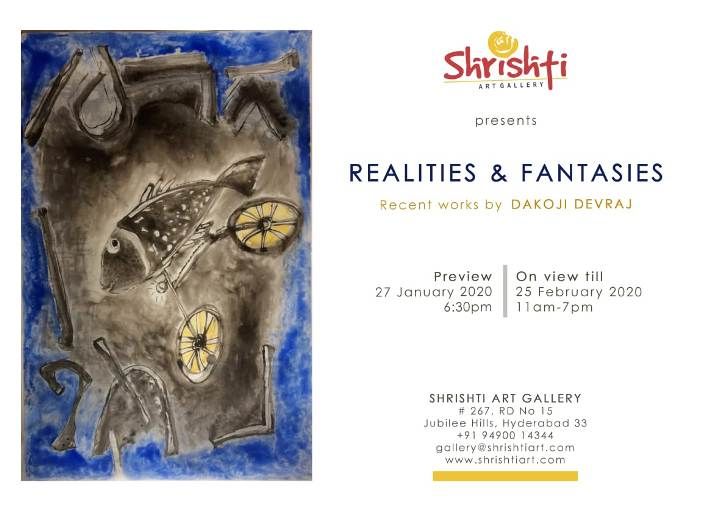 Born in 1944 in Hyderabad, Devraj Dakoji is one of India’s most renowned printmakers. The current exhibition Realities and Fantasies reveals Dakoji’s mastery of a variety of mediums – Lithography, Watercolors, Sumi Ink. Dakojii has been continuously exploring how an infinite number of textures can be created using Sumi Ink on different papers. In his current works Dakoji uses Sumi Ink along with watercolours and on Yupo Paper which creates interesting variations and textures.

Nature in its entirety has always engaged Dakoji’s creative expression, his canvases populated with rocks, birds and animals. Dakoji restores to our understanding a universe that is charged with energy and mystery.

Devraj Dakoji’s current body of works continues his series called “Wheel of Life”, where he further explores the ideas regarding nature, its current state and the ominous sense of depletion of the Life Force that we face today. Devraj Dakoji believes that “The moving wheel represents the life force in living beings. One wheel is our self, the other wheel is spiritual energy.” His fluid landscapes reveal a world where mythic creatures dance with abandon and in celebration.

His current works attempt to show that nature is changing at an alarming rate. In his recent works, the landscapes are significantly altered. There are fewer birds to be seen. Newer images like a fish on a bicycle appear. Through such images he shows the reality of polluted and depleted water, but lives in a fantasy that life will still go on and nature will learn to survive somehow.

Devraj Dakoji graduated from the College of Fine Arts and Architecture in Hyderabad in 1965. He then joined M.S. University, Baroda where he studied printmaking. Devraj Dakoji is one of the few printmakers in India, who besides pursuing his own artistic career as a brilliant painter and printmaker, has devoted considerable time to develop his skills as a Master Printer and set up  facilities in India for collaborating with a wide range of artists at a time when they were none. Taking over as the Director of the Printmaking Department at the Garhi Studies of the Lalit Kala Akademi, New Delhi, for two decades, and later setting up Atelier 2221 at Shahpurjat in New Delhi with his wife, Pratibha Dakoji from 1996-2003, Devraj set a bench mark for excellence in the field. Unable to continue the Atelier without proper financial support, Devraj has now been living and working in New York for the last three decades, where he is attached to the extremely prestigious EFA Robert Blackburn Printmaking Workshop. Here he teaches. collaborates with major artists and pursues his own artistic career